When I started running 13th Age and 5th edition Dungeons & Dragons, I had the opportunity to play in a 5E game run by Teos "Alphastream" Abadia. He demonstrated an interesting and fun trick; he used cardboard table tents to track combat initative. 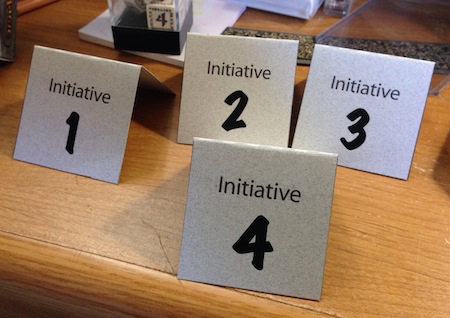 The system is quite easy to implement; after rolling initiative, the player or NPC with the highest inititive count gets tent number 1. The second-highest combatant gets number 2, the next highest gets number 3, and so on. Combat simply follows the order of the tents around the table. If an NPC (or even an PC!) is killed or otherwise removed from the combat, collect their tent from the table.

I discussed this technique with another DM who uses a variation; instead of starting at the top and counting down, he started with the highest-numbered tents and work up the initiative order. Given that initiative is unlikely to go below zero, it provides a more concrete starting point.

In the games I ran using this technique, it worked rather well and was well-received. The initiative order was plainly visible to the players, who could anticipate their turn and plan accordingly. Unlike previous editions of D&D, 5E has no way for combatants to change their place in the initiative order, so there is no need to move the tents around the table.

If you laminate the table tents, you can jot player and NPC names on them as reminders. You can make game notes such as Armor Class, conditions, HP remaining, and so on. (When combat is dragging on, letting players know the AC of the creatures they're fighting doesn't hurt anything; observant players will have figured them out to within a point or two anyway.)

The one downside that I've found so far is there is no elegant way to add new combatants to the initiative order. You can pre-roll their initative and have blank spots in the order, but savvy players may guess that reinforcements or other surprises await them.

I made a PDF for initative tents, numbered 1 through 12. You can download them and print them on your own cardstock.

DMingDungeons & Dragons13th Age
D&D Expeditions is off to a good start!
Taking a Closer Look at Passive Perception