Whoops! I'm off by a week on my posting schedule.

However, this gives me an opportunity to talk a little about what Dungeons & Dragons means to me, given that 2014 is the 40th anniversary of the game and yesterday is deemed the official birthday of the game.

I started playing when I was in the 6th or 7th grade. I was introduced to AD&D by some older friends, and played fairly regularly through high school. Like most people my age, I have fond memories of crowding together in a friends' house or basement, staying up so late the game would eventually fall apart due to uncontrolled giggling. We ran through most of the published modules—the G series of modules, the Queen of the Demonweb Pits, and even Expedition to the Barrier Peaks. (Laser guns and power armor? Why not!?) One of these friends quit playing the game; since he had no use for his AD&D books, he gave them to me.

I rarely got to play D&D while I was in college. After college, some friends of mine and I ran a small comic and gaming store for several years; I got to introduce many people to AD&D 2nd Edition and 3rd Edition. I had a friend who worked at Wizards of the Coast, and he game me one of my most treasured gaming-related gifts: a 3rd edition Player's Handbook signed by virtually the entire D&D staff. 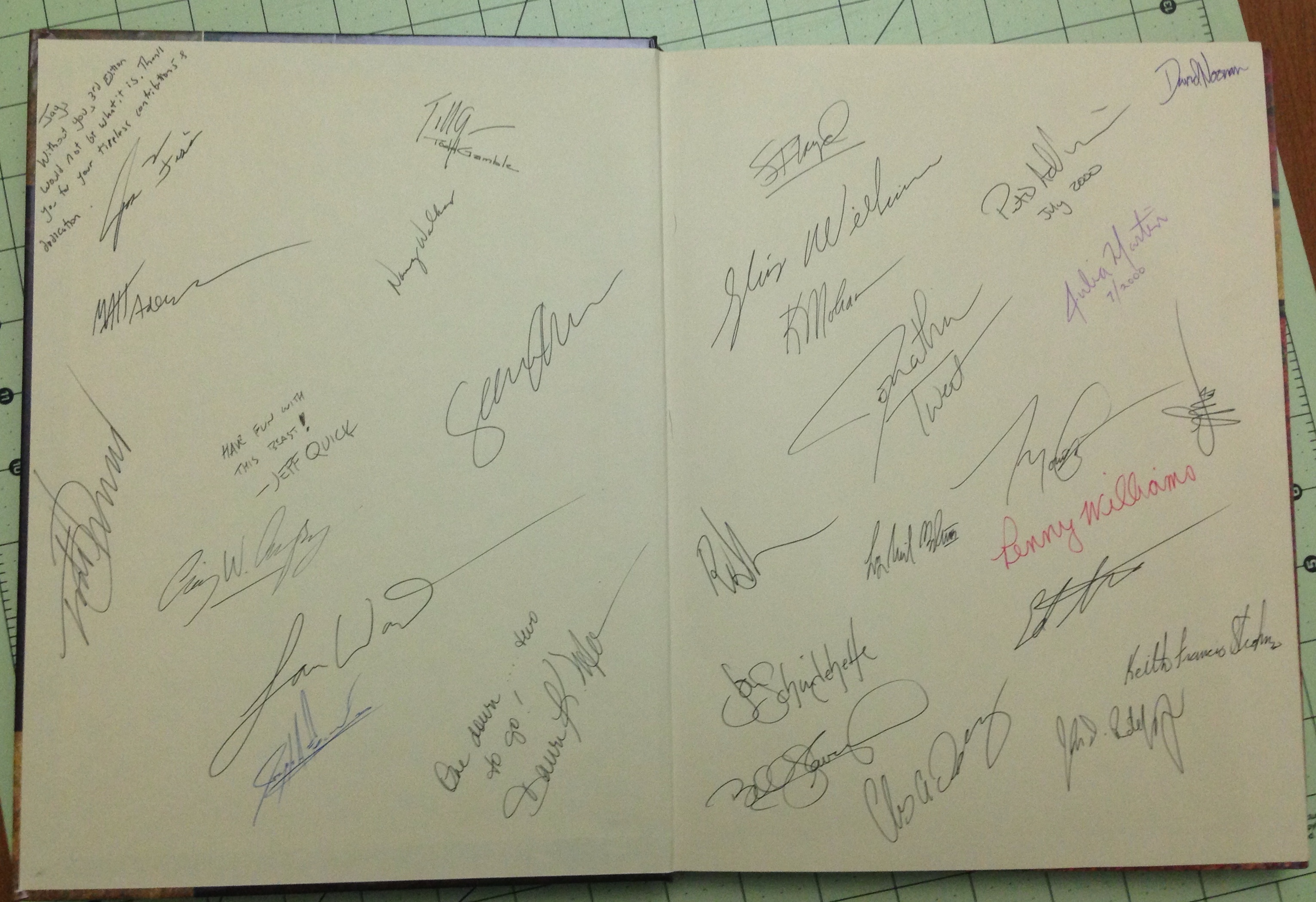 With that, I picked up my dice for the first time in years. I played through the end of our ill-fated gaming store, and returned to the game with a vengeance when I was unexpectedly fired from my next job. I also got my first real taste of DMing the game since high school, and I started to understand how much fun running the game can be.

The group I was playing with drifted apart eventually, but we gave it another go when 4th edition D&D came out. I played in a couple of (very) infrequent home games, but I also got the opportunity to run D&D for local stores with the Lair Assault program. That led to the highlight of my Organized Play for the year, the Vault of the Dracolich event. 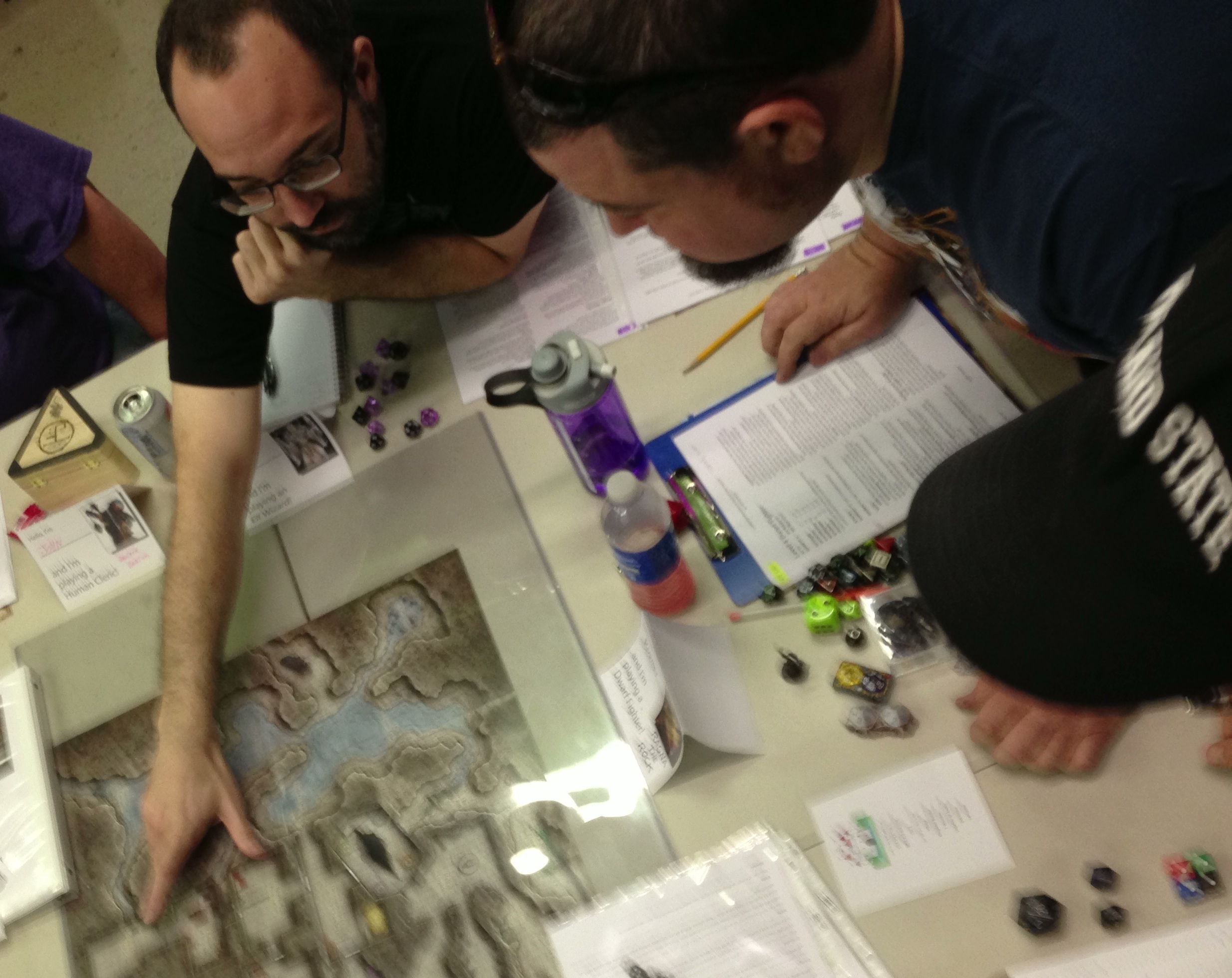 The last year of gaming was a breath of fresh air for me. Now we're on the verge of seeing of the next edition of the game, currently known as "D&D Next" (but will almost certainly become "Dungeons & Dragons"). We have a pretty good idea of what the game will look like, thanks to an unprecedented public playtest period that lasted over a year.

As interest in 4th edition waned in the face of the D&D Next public playtest, I got to try some other RPG systems: I'm in an online Savage Worlds game that grew out of a D&D Next playtest, I've played in an online 13th Age game, and got to try Dungeon World and Torchbearer as well.

This year will mark the first time I get to go to Gen Con, and I plan to sling dice on both sides of the gaming screen. (When I have more information on running, I'll make it available here; come and join me!) I also started this blog in the hopes of contributing something worthwhile to people's games.

The other thing that happened last year involves those books I inherited from my friend. During the holidays, my mother asked me what would make a good gift for a teenager that plays D&D. She is still good friends with my friend's mother, and her grandson has started playing the game. When I realized who we were talking about I went into my garage and found my box of AD&D books; she was able to give her grandson his father's AD&D PHB for Christmas, with his name written on the inside cover.

So congratulations to Dungeons and Dragons on making it to the big 4-0; I'll be doing my part to see that you get to do it again in another 40 years.